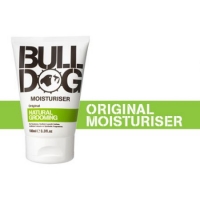 Born out of frustration at the lack of natural men's skin care options available, Bulldog's natural grooming products were unveiled in 2006.

A testament to this ideal, Bulldog is the first male grooming company to be recognised and approved by the BUAV under their Humane Cosmetics Standard. Furthermore, all Bulldog men's grooming products have been approved by the Vegetarian Society.

Ironically although created specifically for men, Bulldog products are free from man-made chemicals such as parabens, sodium laureth sulfate, artificial colours, and synthetic fragrances. In their place, all Bulldog products are augmented with essential oils and a multitude of effective natural actives to deliver visible grooming results just how men like them, hassle free.

By first introducing products from the Bulldog Original range, it expects exports to rise to about 25% of sales over the next 12 to 18 months.

Bulldog is rapidly increasing market share and coinciding exponential growth with new marketing campaigns and a new brand image. With about 5% market share of the UK male skincare market, it is the fourth biggest brand behind L’Oréal, Nivea and Gillette, and recorded an 86% sales increase in 2010.

Bulldog has also launched its products in the US in effort to capture the growing men’s grooming market.

Bulldog’s American expansion plan relies on a partnership with Whole Foods Market.  In their largest export agreement to date, Bulldog aims to have products in all 300 Whole Foods Market stores across the US by summer 2011.

Currently, Bulldog exports to approximately 1,000 stores in Sweden and Norway accounting for about 10% of overall sales of £2.4m. However, the new deal with Whole Foods, the largest natural and organic product retailer in the world, is expected to considerably boost this number.

To ensure the brand had a consistent look and positioned well across all markets, Bulldog redesigned its packaging, logo and product range in advance of its US launch. Furthermore, Bulldog is stepping up its marketing game by launching its Facebook commerce site, outdoor advertising campaign and running in-store promotions, in addition to social media and TV sponsorship.

According to Euromonitor figures, American consumers spent $4.8 billionn on men’s grooming products last year, a figure which has doubled over the last decade.

0 #1 Si2dor 2012-05-09 21:07
My so. Loves bull dog product so easy to buy at boots or sainsburys his skin is so soft and he is 19
Report to administrator
Refresh comments list
RSS feed for comments to this post
JComments
back to top

We have 1518 guests and one member online