Natural Ingredients,
Natural Beauty from Myanmar - 5.0 out of 5 based on 2 votes 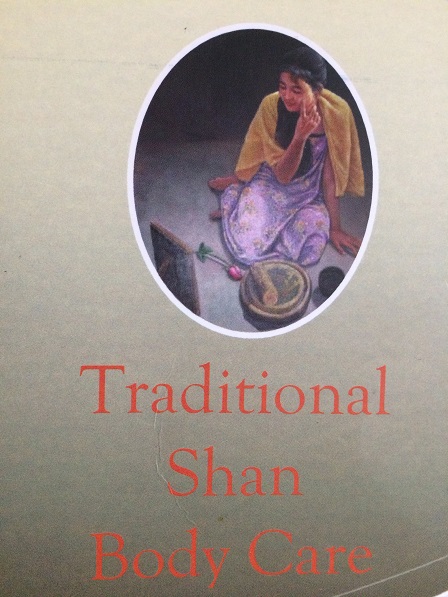 While we were on holiday in Myanmar I noticed most of the women and and children as well as number of men had a yellow patch of something on their faces. I asked our local guide what it was. He explained that it was called Thanakha and was a make up which also worked as a sun protection and as a bonus smelled good too.

We saw this for sale as a piece of wood that needed to be ground which looked like hard work so I asked where I could buy it as a powder. He said that it was available in markets in some places but the wood that you ground yourself was better. I decided I would go for the powder regardless and was lucky enough to find some in pots in one of the hotels we stayed at and then again in a market so I have two lots. 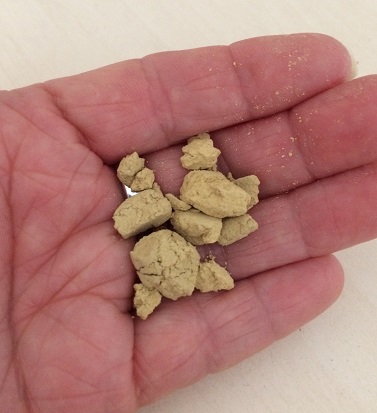 Thanakha cools the skin, prevents sun damage, clears up acne and can even reduce fevers and headaches if swallowed. I haven't tried that though. There is virtually no research to prove any of these claims but the Burmese people certainly all have beautiful skin and look really young for their age. One 2010 Thai study found that “extracts from thanaka bark showed strong anti-inflammatory, significant antioxidation, mild tyrosinase inhibition and slight antibacterial activities.”

Some women managed to produce the most amazing art with their thanakha while others just put a splodge of the stuff on each cheek which looked a bit random. Some applied it to their arms as well as sun protection and for the scent. 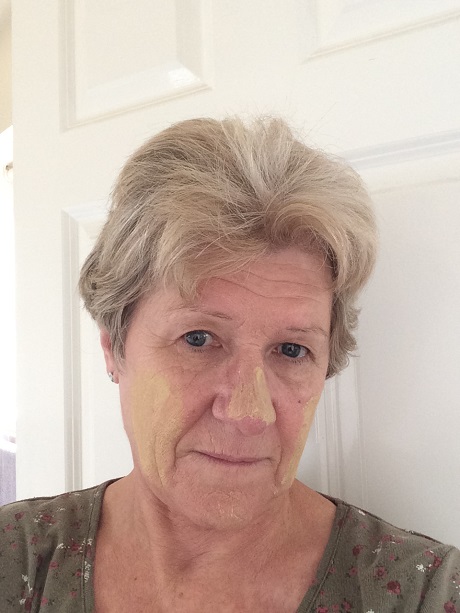 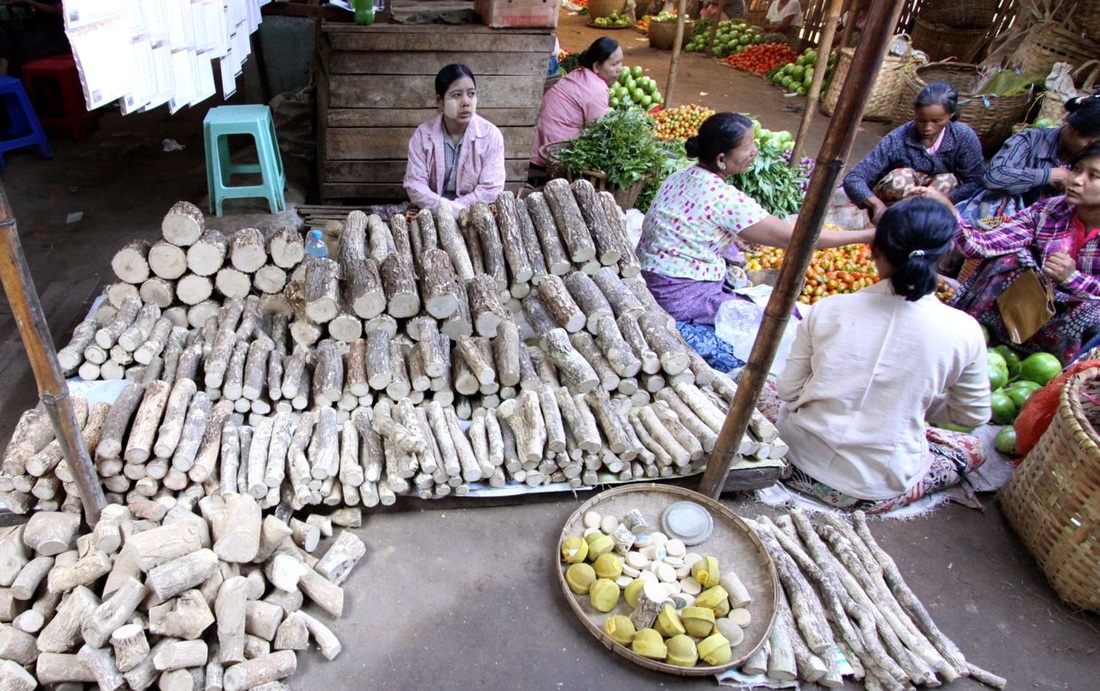 You can buy this on amazon and also there are some beauty products made using thanakha sold under the name shwe pwi nann which are apparently available through ebay.

Apparently thanakha powder mixed with kusumba oil which is also from Myanmar is effective in hair removal making the hair root become weak and loose its strength and then after a time the hair will fall off a bit like men going bald. For hair removal you ned to make sure you get grade A thanakha as it is stronger while grades B and c are okay to use in cosmetics.

The kusumba oil can also be bought on ebay. The oil comes from the seeds of the kusumb tree grown in India, Pakistan and other countries in Asia like Myanmar. It is said that this oil Kusum oil is used in hairdressing and to promote hair growth it seems to counter the idea of using for hair removal ! The oil is also used for cooking and lighting as well as in traditional medicine for skin problems such as acne, itching, and burns and even as massage oil to relieve the pain of rheumatism.

The kinpun I have looks and even smells a bit like ground coffee beans. The Kinpun is the tree grown in dry regions, and its botanical name is Acacia cocinna. First, dry hard and dark-brown Kinpun beans are boiled, cooled down and sieved and to make a shampoo from Myanmar dark hir this liquid is mixed with the liquid collected from soaking the tayaw bark. I cannot use this shampoo as it is for dark hair and makes dark hair darker and shiny. 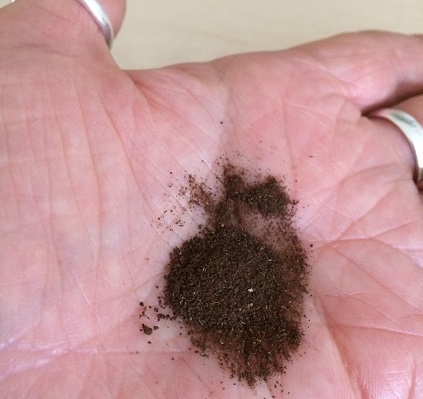 I have kinpun beans ground which I have use as a body scrub and I add this to my natural shower gels or soap. It is quite a gentle scrub as my kinpun is quite finely ground. If I had ground it myself I guess I could have left it coarser.

I mixed mine with my coconut oil too and a little shower gel and this made a lovely moisturising scrub which left my skin feeling clean and smooth and looking very well cared for. I usually make my on body scrub with ground coffee beans and coconut oil – with or without shower gel and so I just replaced the coffee with kinpun and it worked well.

The Tayaw is a kind of small tree or shrub and its botanical name is Grewia Polygama. For the shampoo they use just the bark in small pieces. This is soaked in water for around 15 to 20 minutes then you mix it up with your fingers to get a slippery slightly frothy mix and this is then the shampoo you use for washing your hair.

The bark is beaten till flat and the flatter the bark the more foamy your shampoo mix becomes . If you have dark hair then you can add the kinpun but if like me your hair is light then they suggest adding some lime juice to lighten it , cure and prevent dandruff and any itchy scalp.

Personally as I can't used the kinbun which is the soapier I found that using a good natural shampoo then the tayaw worked best for me and the Tayaw worked well as a natural hair conditioner making the hair soft and pliant and therefore easy to comb. 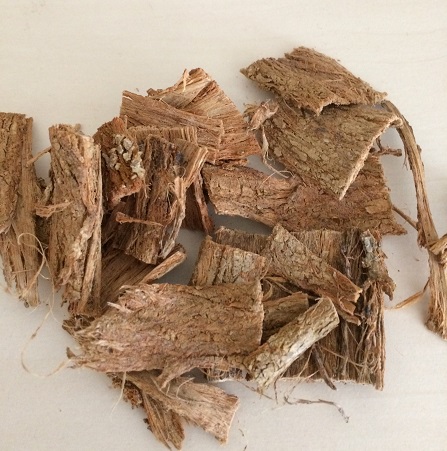 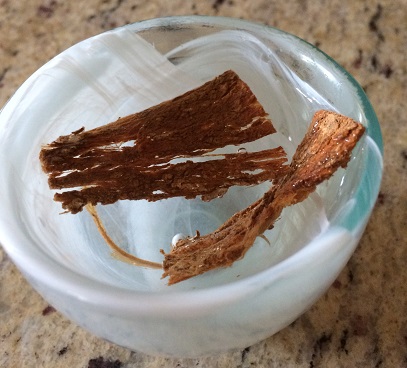 Although this shampoo is still widely made at home by many Burmese people these days you can also buy it ready made in plastic bags in the markets. There are also small modern packets of Tayaw-Kinbun shampoo made with modern machines by local manufacturers sold in bottles. I didn't buy any as it was the one with kinbun so only good for dark hair.

Traditionally Burmese people consider hair washing to be auspicious and so on the Myanmar New Year Day, the young people pay their respects to the aged by washing their hair and cutting their nails.

I love finding out about natural beauty products traditionally used by other cultures and we have started to learn from these over recent years. If you think about argan oil, shea butter and tea tree to name just a few that are now used widely in beauty and toiletries world wide.

More in this category: « My Feelunique 12 days of Christmas Advent Calendar

+1 #1 Dese 2017-04-12 19:58
Thank you, Catsholiday, for sharing what you have discovered about these amazing natural products from other regions. You seem to have gained an enormous amount of knowledge during your travels and the photos really help me to understand what these amazing products are and how they are used.

We have 4123 guests and no members online